Oh I wish I was Brentwood bound…

Why Paul Simon wished he was homeward bound to Brentwood

As a teenager I’d heard a rumour that Paul Simon wrote his classic song Homeward Bound while sitting at Brentwood Station in the 1960s. Back then it was easy to imagine him in the moribund waiting room writing lines about shades of mediocrity.

But in the internet age it’s possible to verify such assertions, and the truth is that Simon penned Homeward Bound in either Ditton or Halebank stations in Widnes, while waiting for a train back to Brentwood, where he was living with his girlfriend. Blimey. Yes, it was Brentwood that made Simon and Garfunkel get all poetic.

SITTING IN THE RAILWAY STATION
He made his UK debut at the Railway Inn Folk Club in Brentwood in 1964 and met Kathy Chitty there, the inspiration for Kathy’s Song and America. She was a 17-year-old Essex girl on the door selling tickets to bearded men in cord jackets. They dated for two years until Paul returned to the US. Kathy now lives in Wales and maintains a diplomatic sound of silence on all Simon-related subjects. Although I can picture her as a slightly folksier version of Celebrity Big Brother’s uber-Essex babe Chantelle.

These days if Simon was homeward bound to Brentwood, he’d walk out of the station, trudge 100 metres up King’s Road and come to the Amstrad headquarters. You wonder what Sir Alan Sugar would make of the wandering folk troubadour:

“Paul, shut up a minute will yer, you’re doing my head in! You took a bloody trip to Widnes to play a gig and all you could do is whinge about yer bleeding girlfriend Kaffy. No sales figures, just lyrics scrawled on a British Rail timetable. I’m not having that. Shut up, I am talking! OK, you can knock out a decent tune, but you ain’t doing it for me. If I asked you to build me a swimming pool you’d be knocking off every time you saw some leaves that are green turn to brown. With regret, Paul, you’re fired!”
Posted by Pete May at 09:42 14 comments:

Would Mr Darcy now come from Essex? It’s interesting to note that the hero of David Nicholls’ very funny novel Starter For Ten is a character called Brian from Southend. The opening scene sees Brian and his two old mates from school on the end of Southend Pier, drinking beer and contemplating his imminent departure to university.

The novel is heavily autobiographical, but even though Nicholls himself hails from Hampshire he makes Brian an Essex man. These days coming from Essex is a form of literary shorthand for an unsophisticated bloke who drinks too much and then has many comedic moments trying to bed a posh bird with middle-class bohemian parents who walk around the house in the nude. And having to overcome the prejudice against Essex men makes it all the better when he finally gets a girl.

DICKENS' PUB LANDLORD
Indeed, Essex characters have a long history in literature. A recent reading of Charles Dickens’ Barnaby Rudge, published in 1841, made me realise that old Dicko had created the Pub Landlord 170 years before Al Murray. Dickens’ character of John Willet, landlord of the Maypole Inn in Chigwell, likes to sit by his fireside boiler ‘tackling’ subjects in his slow-witted boorish manner, surrounded by his barroom acolytes. He would almost definitely read the Daily Express, dislike the EU and insist on a white wine for the lady. Dickens’ enjoys his comeuppance. There’s a very funny and poignant scene where a stunned John is finally rendered speechless as anti-Papist Gordon Rioters smash up his pub.

Hopefully there might one day be a sophisticated Essex character in a novel. But perhaps the comedy of Essex characters is just too good for authors to resist. Indeed, there may well be a PhD to be had studying the role of the Essex Geezer in literature.
Posted by Pete May at 03:45 No comments:

Email ThisBlogThis!Share to TwitterShare to FacebookShare to Pinterest
Labels: August, Essex in literature

The Road to Southend Pier 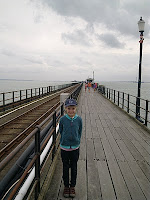 We’re eating fish and chips on the gravel beach in the rain. A typical English day trip, but the chips are good and we’re just about sheltered by two deck-chairs. For my nine-year-old daughter Nell it’s a real adventure. And after eating chips she then finds three dead baby crabs and we dip a toe in the sea. It’s hard to believe we were in London an hour ago.

It’s less enjoyable for the Essex family with teenage kids behind us on the front. “What a shit day… only ‘cos you made it shit… move your fat arse… shut up!… but I’ve got a soaking wet arse!”

Still, the weather clears up and it’s pleasing to see Southend, once a solidly white working class resort, now being used by many ‘new’ EastEnders. We spot families who are black, Bangladeshi and orthodox Jewish in 100 metres on the seafront.

The listed domed front of the Kursaal — the world's first theme park — is still there, which brings back memories of Rod Stewart and the Faces and Steve Harley and Cockney Rebel gigs in the 1970s. Today it’s full of fail-to-grab a soft toy machines, ten-pin bowling and staff in electronic illuminated bunny ears.

ADVENTURE ISLAND
Nell loves Adventure Island, the fun fair by the Pier. We avoid the chuck a ball at something for two quid stalls and my daughter enjoys the high windmill slide and crooked house. It’s staffed by friendly studenty types and obviously hugely popular with families.

But the real highlight of any trip is Southend Pier — although sadly the nearby Pier Bar where my mate Nick used to bop in his Teddy Boy days appears to have disappeared.

There’s a newly rebuilt glass and wood entrance hall with Matrix-style futuristic lifts. We buy walk there/get the train back tickets (£3 adults, £1.60 kids). The Pier appears to stretch into the sea forever. Nell decides to walk only a little way because she says she’ll be scared walking over water and even more scared on the train. She tackles her fear by crawling on the planks and looking through the gaps at the water below. A splinter in her finger puts a halt to this but at least takes her mind off being scared. I entice her onwards by revealing it’s the longest pleasure pier in the world at 1.33 miles.

ESTUARY ENGLISH
Southend Pier has had a battered history, but it refuses to die. It’s suffered devastating fires in 1959, 1976, 1995 and 2005, plus in 1986 the MV Kingsabbey sliced through the pier and left it with a 70 feet gap. But as Sir John Betjeman said “The pier is Southend. Southend is the Pier”. And they just keep on rebuilding it.

It’s calm out at sea after the busy promenade. We wave at the passing train named the Sir John Betjeman. And stopping at the shelters on the way, fortified by a shared Mars Bar at the vending machine half way out, we find ourselves edging towards the pierhead and sensing just how wide the mouth of the Thames is.

It reminds me of my own childish excitement when our family first ventured down the Pier. The Isle of Grain and the Isle of Sheppey are vivid and enticing across the estuary. The sea is flat and on a hot day there’s a pleasing breeze. Boats sail past, tantalizingly close.

END OF THE PIER SHOW
Finally we reach the rectangular platform at the end of the pier. There aren’t many places where you can stand 1.33 miles out to sea. It’s much better than say Brighton pier. The tacky amusements have gone and there’s just a reasonably priced café and a new lifeboat station with a RNLI shop and the lifeboats on display through glass windows.

People fish from the end of the pier, or sit and gaze at Kent and Cooling Marshes and the mouth of the Thames in the distance. Nell looks through a pay and display telescope and watches the cargo ships heading towards Tilbury.

It’s all rather splendid. There aren’t many places that have a world record anything, yet so close to London we have the world’s longest pleasure pier. And for children and dads it’s a great day trip. Perhaps we should succumb to pier pressure a bit more.
Posted by Pete May at 08:18 1 comment:

All Stations to Shoeburyness

Who needs the Settle-Carlisle line when you’ve got Fenchurch Street to Shoeburyness?

It’s strange to have reached middle age and never used the Fenchurch Street to Shoeburyness line (bar the Barking to Upminster section that my dad used to use to get home quicker from West Ham games).

There was a sort of railway apartheid as a teenager in the 1970s; the denizens of Brentwood and Shenfield used the Liverpool Street line. The Fenchurch Street line belonged to West Horndon and Laindonites and if you travelled too far along it the rumour was you went straight off the end of Southend Pier.

ROMAN INVASION
Whatever side you approach Fenchurch Street from, it has great views of either the Tower of London or the Gherkin. And once you’re on the c2c train and past the social housing and building works, it gets really rather scenic beyond Upminster. There’s fields stretching all the way across the reclaimed marshes to the Thames and it’s not dissimilar to Cooling Marsh in Kent where Vinnie Jones-lookalike Magwitch might still be lurking.

On the north side of the railway there’s the ruin of Hadleigh Castle, once painted by Constable. The park here is now going to feature in the mountain biking events at the 2012 Olympics. The land here rises up to wooded hills. In his book Britain BC, the Time Team archaeologist Francis Pryor reckons the Roman invaders mounted a steep gravel ridge between East Tilbury and Mucking and used it as a defensive position in 43AD. You wonder if there might have been the odd bundle on these hills at Hadleigh too as the Romans defended themselves against hordes of Brittunculi armed with satellite dishes and super strength lager.

LEIGH COCKLES
But the biggest surprise after a glimpse of Canvey Island from Benfleet is when the track starts to hog the coast. There’s the boats and river estuary of Leigh-on-Sea, with a series of Dickensian-looking weather-boarded houses and cobbled streets by the shore in Old Leigh and the Crooked Billet pub. When I interviewed the late Lee Brilleaux over a lunchtime pint or four he recommended the cockles here at Leigh as a great cure for a hangover.

Chalkwell station is right on the beach and through the salt-ravaged station windows you can see nothing but sea. It’s the sort of place you’d rave about were it in Devon and quite a way to start a commute into the City.

Southend Central spoils it a bit by being slightly inland but at the terminus of Shoeburyness you are only a short hop to the North Sea. And I must confess it easily beats the Southend to Liverpool Street line.

Forty-odd minutes from London you can be on a beach via the Thames estuary, boats, beaches and glimpses of Kent. And the Grays and Dagenham Docks loop is yet to come… Never mind the train to Penzance, explore the Essex Riviera line.
Posted by Pete May at 13:37 No comments: