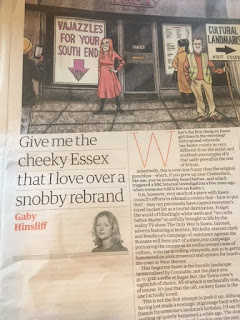 Good piece by Gaby Hinsliff in the Guardian today where she argues, "Give me the cheeky Essex that I Iove over a snobby rebrand." She's referring to Essex County Council's new campaign to emphasise the county as the home of Boudicca, the Peasant's Revolt, Michelin-starred restaurants and fine wineries. Which is all very true, but as I argued in my book The Joy of Essex, there will always be two sides to the county, estuary Essex with its East End overspill, and the posher villages and towns to the north.

Should Essex ditch the Towie image? It's all sparked a (lack of) culture war. The Sun also covered the debate and PR guru Mark Borkowski made the point: "There’s no denying the cultural — and, I’m certain, economic — impact of Towie on Essex’s fame. For me, the ideal campaign would acknowledge these positives, even use them to introduce lesser-known facets of Essex, rather than using Towie as a sacrificial lamb.”

Discerning visitors surely know that Essex isn't completely vajazzles, though that side of the county can't be disinvented. Just as Upminster boy Ian Dury could indulge in clever wordplay yet also start Plaistow Patricia with a barrage of swearwords, high and low culture can mix. The artist Michael Landy had it right in his Welcome To Essex exhibition at Firstsite in Colchester last summer, where he celebrated lowbrow Essex with high art.

The PR campaign is well-meaning but you can't air-brush out dodgy Essex. As Gaby Hinsliff writes: "My Essex is a pancake-flat, dead ordinary hunk of East Anglia that has ingeniously vajazzled itself up into something much more interesting by leveraging the idea of Essex as a cheeky, sexy, loudly inappropriate cultural and economic phenomenon... How do you reinvent a place that has already reinvented itself in ways no other county would dare? Try it, and the joke’s on you." 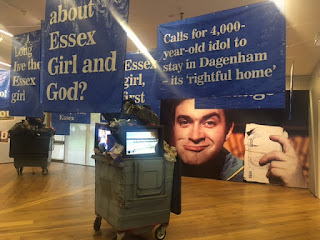 Essex is Britain’s most misunderstood county claims the cover of Gillian Darnley’s book Excellent Essex. Certainly the media has appeared fascinated by the county since Simon Heffer’s profile of Essex Man, aka “Mrs Thatcher’s bruiser”, appeared in the Sunday Telegraph in 1990. The Towie phenomenon of the past decade has only increased the image of bling and vulgar excess.
But in Michael Landy’s Welcome to Essex, his new exhibition at Firstsite in Colchester, the Ilford-raised Landy has chosen to embrace the county’s brash image. “I see myself as a mirror,” says Landy, who celebrates the dodgy heritage of Essex, while also making the viewer aware that journalists have been pretty lazy in reaching for Essex caricatures whenever a story about the region crops up.
A giant cut-out of Edward Collet’s original Essex Man cartoon dominates the foyer, with the words of the original Simon Heffer piece on the back. The spirit of Thatcherism looms large, with a wall display of Margaret Thatcher meeting the owners of the first council house to be sold in Harold Hill and a tarpaulin with the logo “Essex Man has seen off socialism.”
Riffing on the fact that Essex was described as “the dustbin of London”, Landy has mounted 1990s TVs on wheelie-bins surrounded by bin-liners of rubbish, The TVs play clips of Sir Peregrine Worsthorne and Simon Heffer talking about Essex Man, news items discussing Essex Girls and white stilettos, a Towie vajazzle session, Brexiteer MP Mark Francois, boy racers on Southend seafront, Time Team on the discovery of the Anglo-Saxon Prittlewell prince complete with bling grave goods, and music from Depeche Mode, Ian Dury and Billy Bragg. All in front of giant posters of Harry Enfield’s Loadsamoney character and the Towie cast. In a homage to Towie a large sign reads: “Warning this archive contains flash cars, big watches and false boobs.” 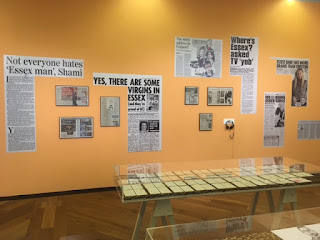 On a personal level, you know you’ve done good as an Essex Man when you appear in a vitrine… My book The Joy of Essex appears in a glass cabinet, complete with Michael’s yellow stick-it notes still in place. It’s alongside a piece I wrote for the Guardian back in 1991 entitled “Awoight on the night,” discussing the cockney hybrid argot of Essex. Like many hacks, my own work has contributed to the mythology of Essex.
Reflecting estuary Essex’s industrial heritage Landy has hung tarpaulins from the roof emblazoned with media headlines such as “The bonds of Basildon”, “Sexy Saxons the Essex girls of old England” and “It’s Hollywood… near Brentwood”. There’s even one headline claiming that in uncultured Essex more people use Firstsite as a toilet than as an art gallery.
Landy has also had great fun with the Dagenham Idol, a 4000-year old wooden figure that was unearthed on Rainham Marshes. Gloriously for the county’s Essexual image, it was thought to be a phallic appendage suitable for either male or female use. Landy has created his own version of the Idol and covered it in gold, burying it in a spoof archaeological excavation pit in a separate room at the exhibition
The walls of the vitrine room are covered in press features on Essex. The Sunday Telegraph asks if Brentwood is the worst address in England, the Sun claims there are no virgins in Essex and the Daily Mail berates Shami Chakrabarti for patronising Essex Man. The Essex Man stereotype was in fact quite complimentary, argues Simon Heffer, since it was celebrating the aspirational character and achievement of working class East Enders who had moved out to the country. Certainly the sharp wit of Essex folk and their willingness to debunk pomposity has proved popular on reality TV shows.
The Essex Girl phenomenon of the 1990s has fared less well and was nothing to do with Heffer. Landy devotes a cabinet to Essex Girl jokes and they come across today as rebooted sexist jokes about ‘slappers’, perhaps stemming from a male fear of women who knew what they wanted both in bed and done-up Ford Cortinas. Similarly the video of the Spitting Image song Essex is Crap now appears simply patronising.
There are certainly two sides of Essex — the East End overspill towns and the more Suffolk-like country areas beyond the A13. Landy knows this and as part of the preparation for this show he took me for a walk on the Essex Way across a beautiful pastoral landscape before looking back in Ongar for the bus home. One bonus was that he didn’t destroy our OS map (Landy is the artist who famously destroyed all his possessions in 2001).
This exhibition does make you wish for a more nuanced media view of Essex. But then again there was always a grain of truth in the Essex Man stereotype and perhaps it’s better to celebrate the county’s image rather than be too offended by it. Essex is nothing if not in your face. Bling and brashness are not the only way in Essex — but the media have got plenty of arterial road mileage out of it, as Landy perfectly illustrates. 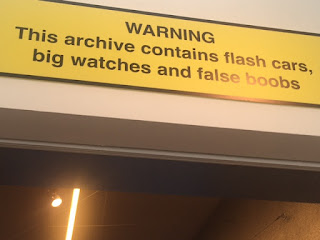 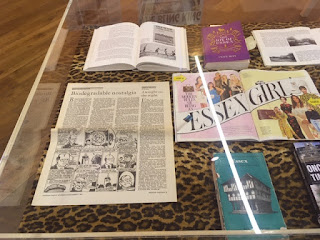 Told you my work is art... My book The Joy of Essex is on display in a vitrine (that's a posh word for a cabinet) in Michael Landy's Welcome To Essex exhibition at Colchester's Firstsite gallery. Also my 1991 piece from the Guardian on the Essex argot.

It's a great show about the county's cultural baggage and media stereotypes, including a giant figure of Essex Man as you enter, tabloid headlines printed on tarpaulins and 1990s TVs on wheelie-bins playing clips of Essex luminaries. The Ilford-born Landy sees himself as a mirror to all the images projected on to Essex — and he's clearly had a lot of fun making this exhibition. Proper art. Runs until Sept 5. 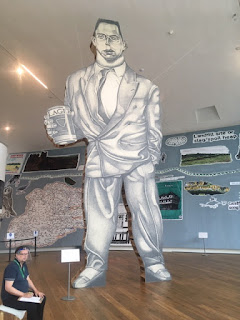 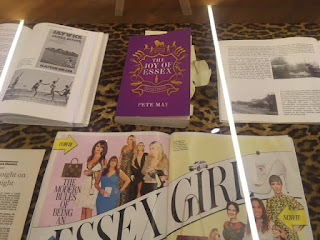 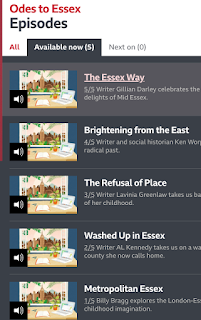 Enjoyed listening to Radio 3's Odes to Essex series. Would any other county have got its own radio series? Billy Bragg had a lot to say about childhood games on the liminal marshland around Barking, an area full of rusting cars, old sofas and girlie magazines. Excellent Essex author Gillian Darley take on mid-Essex, poet and novelist Lavinia Greenlaw looks at the refusal of place through her childhood in an Essex village and night trips across muddy fields trying to get somewhere, while writer Ken Warpole speaks of the Canvey Island floods and Essex's radical past. Well worth a listen. Click on the link to play.
Posted by Pete May at 04:21 No comments: 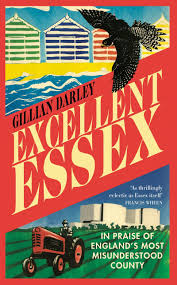 Just finished reading a Christmas gift of Excellent Essex by Gillian Darley. There's some brilliant research in this tome, although the sub-title, "In praise of England's most misunderstood county" doesn't really reflect the content; Essex Man and the Towie phenomenon get just half a dozen pages and there's no real discussion about the validity or not of these stereotypes.

This is much more a Radio 4 version of Essex. Darley grew up in Sudbury on the Essex/Suffolk border and seemingly prefers the old villages of north Essex to estuary Essex. She is mainly an architectural journalist and Excellent Essex is full of info on interesting buildings and intriguing historical facts. You can dip into this book and find details of Tolstoyian communities in Purleigh, bohemian artists in Great Bardfield and Frank Crittall's windows and modernist homes in Silver End.

She's also very good on the history of Butlin's in Clacton, Bata at Tilbury, plotland developments like Basildon and Jaywick and the development of new towns at Harlow, Basildon and South Woodham Ferrers. Essex has always been a haven for the slightly different stresses Darley, from mechanical elephants in Thaxted to cheetahs at Romford dogtrack, suffragettes in Great Baddow and Grayson Perry's A House for Essex on the Stour. The index stretches from the A12 and Robert Adam to Wrabness and Zeppelins. There should be something for everyone here.

We had The Wolf of Wall Street, the Wolf of Shenfield and now it seems the Wolves of West Horndon. The Daily Mail contains a great story about nine 'Towie oil traders' operating as Vega Capital London out of an industrial park in West Horndon, who have made a claimed £487 million trading in futures, gambling on the price of oil going down during the pandemic.

Even better three of the Essex high-rollers are nicknamed Cuddles, Ari and Dog, support West Ham and like to visit Marbella. The only downside to their nice little earner is a trading lawsuit from the US, though the so called 'oil oiks' insist they acted on a 'blaring market signal'. Essex Man is nothing if not entrepreneurial and really futures trading can't be that different to trading on Romford Market. Though you do wonder how they'll spend all that money in West Horndon — it's only got one pub and one restaurant. Expect a movie very soon. 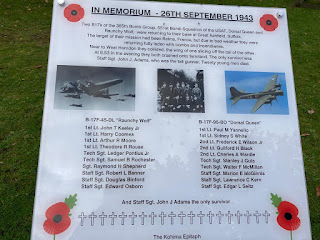 Thanks to my sister Kaz for supplying these pics of the WW2 memorial bench in West Horndon. The bench marks the area where 20 young men lost their lives after two US Air Force bombers collided above the fields around West Horndon. The only survivor was tail gunner John Adams. Apparently bits of the planes can still be around around the local woods. A sad tale, but well worth remembering today. 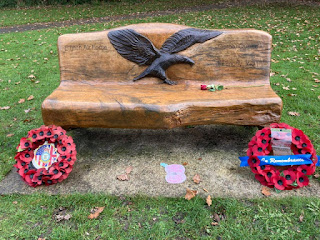