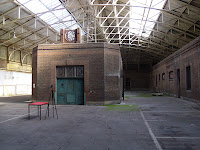 Some interesting plans to turn the disused Tilbury Riverside station into a museum, cafe and river viewing area as part of the Big Ocean Project. It's a place full of history. The Windrush arrived there in 1948 with the first immigrants from Jamaica. It was a holding station for the Dunkirk rescue fleet. The ten-pound Poms left for Australia from Tilbury. George Orwell writes about leaving from Tilbury in Down and Out In Paris and London. Gandhi arrived there and Cliff Richard too, when he was plain Harry Webb. KDC London opened up the station for a stakeholders meeting and there was a lot of enthusiasm from councillors, English Heritage and local people.

It’s an impressive but sad place, as ghost stations often are. The station closed in 1990. The central clock is rusting away, the ticket office is full of debris and water, yellow paint is peeling from the walls and “buffet” signs are fading away. Yet it’s a large airy space and with a customer-base of cruise passengers and locals wanting to see the Thames, plus walks to Tilbury and Coalhouse forts it could surely be viable as a riverside museum and cafe. For details of the scheme click on the link above.
Posted by Pete May at 03:17 No comments:

A great quote from Grayson Perry in the Guardian: “I have a thick crust of Islington but if you cut me, you find Essex there. The tone of my taste decisions is often very Essex, but I put an Islington spin on them. That might be the deciding fact in my entire oeuvre.”
Grayson is possibly the greatest transvestite artist ever to come from Chelmsford. His C4 programme All In the Best Possible Taste has been brilliant on taste and class (oh dear we have the Penguin covers mugs, but thankfully no Aga) and his exhibition of the Tim Rakewell tapestries, The Vanity of Small Differences, at the Victoria Miro Gallery in Islington is definitely recommended.
Posted by Pete May at 03:20 No comments:

Tendring is the night

Just spent an enjoyable couple of days in Clacton-on-Sea on the Tendring Peninsula. Our youngest daughter loved the pier with its helter skelter and grabbing machines and two pence cascades. Great fish and chips too at Geo's and a lovely B&B at the Chudleigh, where Carol and Peter were very friendly hosts. Clacton also has Martello Towers from the Napoloeonic wars. A mile down the coast is the old 'plotlands' settlement of Jaywick Sands which has superb beaches but is the most deprived region in the UK according to a 2011 government report, with bungalows going for just fifty grand. Northwards is Frinton, which is so posh it only got a pub in 2000 and has a bookshop and gallery where they discuss border terriers and literature, delis, chic kitchenware shops, Zen Art Ltd and an excellent foodie cafe in the Hat and Mouse.

You can reach both Clacton and Frinton in less than two hours by train from Liverpool Street and the wide beaches of this Essex hinterland suggest it's a much undervalued resource. There's another pier at Walton-on-the-Naze, great views across the landscape to the weird cranescape of Harwich and generally a bit of something for everyone on the Tendring Peninsula, aka the "Essex Sunshine Coast", including an offshore wind farm. Though this being Britain on a bank holiday, it did rain most of the time…
Posted by Pete May at 09:03 No comments: