The only way is Brentwood 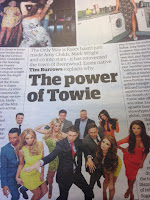 There's a double-page feature in today's Guardian on my old home town of Brentwood, to mark the start of the 16th series of Towie. The tourists are still packing out Sugar Hut and the Brentwood Holiday Inn, while coach trips are still driving round the shops of Sam and Billie Faiers, Amy Childs and Lydia Bright. It seems incredible that Towie has lasted so long, since nothing much happens bar a bit of dressing up and gossip about who's dating who.

But writer Tim Burrows makes an interesting point that the Towie tribes are basically performers of an Essex stereotype that perhaps shouldn't be taken seriously at all: "Through years of representation in Mike Leigh films, Birds of a Feather, newspaper editorials and the rest, the idea of Essex has manifested into a kind of performance. The vulgar Essex person was in part invented by the media, but in lampooning self-made men and women for luxuriating in their sudden wealth, it created a myth, and gave the children of the original Essex men and women a lucrative commodity for our age of communications: themselves." Click on the link to read.
Posted by Pete May at 08:19 No comments:

The soggy splendour of Rainham Marshes 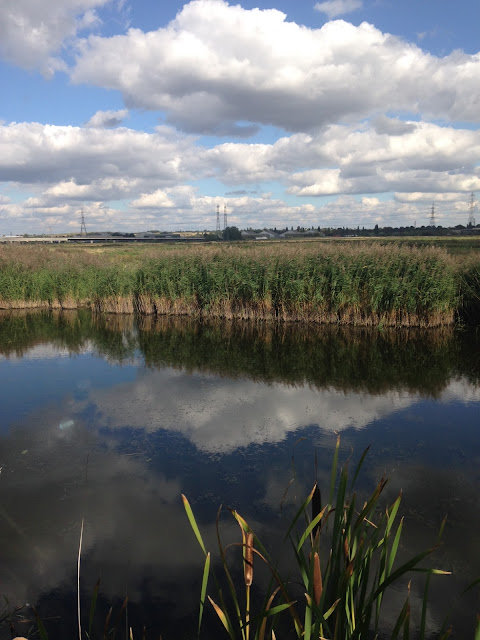 Spent a great afternoon on Rainham Marshes with my wife and younger daughter. In the shadow of the A13, the C2C railway line and pylons, we completed a two-mile circular walk around the duckboard paths. It's hard to believe this area is so close to London and we saw huge marsh frogs, dragonflies, kestrels, coots and an egret all amid lots of streams and giant bullrushes.

The marshes were only preserved because the land was once used an army firing range and it's fascinating to see the old shooting butts and targets still there. The Marshes have a number of very plush wooden hides and also a giant manmade anthill that humans can crawl through — some of the real anthills on the Marshes are a century old.

The main building is very distinctive and has huge glass windows offering a marshy panorama with coffee and cakes. The walk from Purfleet station is good too, offering fine views of the Thames and an old magazine (not published by IPC) that once housed enough gunpowder to blow up a sizeable chinch of Essex. Well worth a visit. 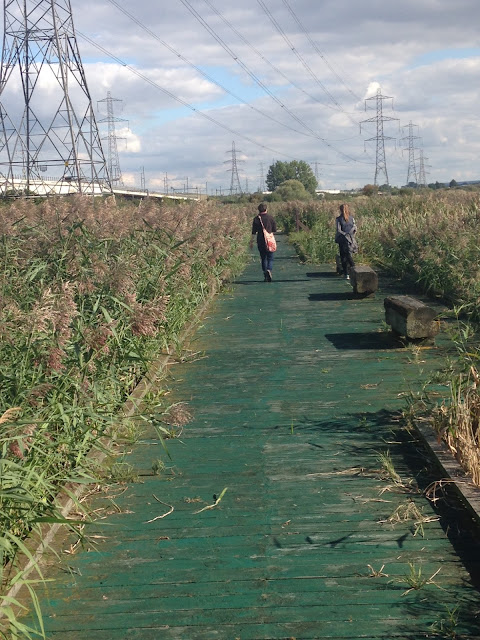 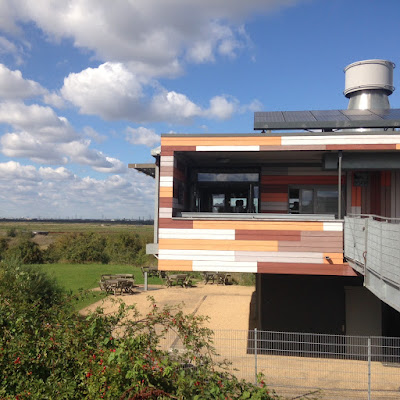 Good to hear that Rainham Marshes helped inspire Craig Bennett, the new CEO of Friends of the Earth. A recent Guardian interview reveals: "His first job was to protect his own patch, Rainham Marshes. In those days even his family thought it a dump. But last month he went back and saw a completely different landscape. 'If we can turn places like Rainham Marshes from being seen as a dump into somewhere where there are water voles, and which tens of thousands of people visit every year, we can do anything.'"

Talking of Rainham, it also gets an honorary mention in Bill Bailey's great Billy Bragg spoof Unisex Chipshop where Bill sings: "In my dreams I would see her / Running naked through the woods round Rainham/ If I had some tigers I'd train them/ To protect her / from the sexual fascism that was lurkin' / round the gherkins." Not a lot of people know that.
Posted by Pete May at 03:25 No comments:

A backhanded tribute to the values of Essex Man in the Guardian's obituary of Billericay's colourful former MP Teresa Gorman, remembered by my Billericay pal Shazzer for her orange hair and commitment to HRT campaigning. The Guardian writes: "A supporter of capital punishment, she was a natural for that part of the Essex electorate, often from the risen working class, among whom support for the free market and retribution flourished. Gorman fitted that outlook exactly: she was born Teresa Moore in Putney, south-west London, where her mother was a tearoom waitress and her father a self-made demolition contractor, having started out as a builder’s labourer."
Posted by Pete May at 09:18 1 comment: 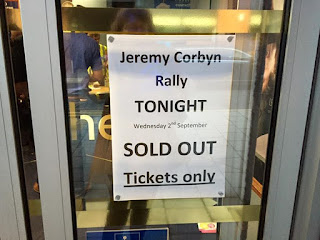