Enjoyed Grayson Perry's Dream House on Channel 4, which was one long homage to Essex. Grayson wore a pink jacket with "Essex" embroidered on the back as he won over the residents  of Wrabness with his plan to create an "Essex Taj Mahal". The house he builds is a cross between Hansel and Gretel and a Catholic Church. It celebrates Julie May Cope, a fictional Essex Woman who was married twice and died after being hit by a pizza delivery bike. The most enjoyable moment is when Grayson gets a gang of real-life Essex Julies on bikes and persuades then to pedal round Julie's life path, from Canvey Island to a tower block in Basildon and then being hit by a dodgy pizza boy in Colchester. His Julies have a surprising amount of empathy for his dream house and the artist himself looks pretty tearful as he confronts his problematic relationship with his mother. The documentary also shows how open-minded people in Essex can be; geezer builders buy into a fantasy house created by a metropolitan transvestite while the posher residents of Wrabness seem quite content to have a massive goddess with huge yellow breasts topping Grayson's fantasy structure. Time for a pilgrimage to Wrabness.
Posted by Pete May at 09:42 No comments: 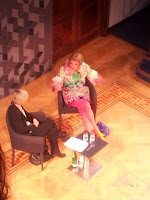 Plenty of coverage of Grayson Perry's House for Essex in Wrabness. It's a homage to an Essex everywoman called Julie and according to Grayson is for, "single mums in Dagenham, hairdressers in Colchester, and the landscape and history of Essex." Julie was born in Canvey Island in 1953 and married first Dave, a bit of a rogue, and then Bob who was steadier. Tragically she was knocked over by a boy racer on a moped and killed and the house is her shrine. The offending moped can be seen hanging from the ceiling. The BBC's Will Gompertz went through Julie's record collection and found a number of Dr Feelgood LPs, suggesting that both Perry (and Julie) are fans. At last Essex is high art and rarefied critics are having to speak reverentially about Julie and Dave. Nice one, Grayson.
Posted by Pete May at 03:23 1 comment: 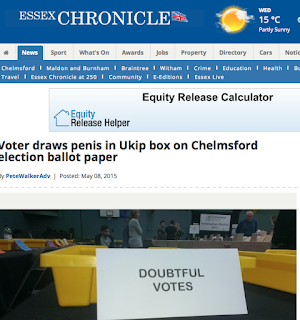 Here's a very Essex take on the election from the Essex Chronicle. A Chelmsford voter drew a penis in the box besides Ukip candidate Mark Gough's name. The crude vote, from the Springfield North ward, sparked a lively debate about whether the penis was a comment or an actual vote for the candidate. The offending penis was flagged up as a doubtful vote and not allowed to stand, though Ukip candidate Gough joked, "He was trying to vote for me!" Perhaps the voter was just applying the term 'honourable member' rather too literally…
Posted by Pete May at 05:01 2 comments:

Email ThisBlogThis!Share to TwitterShare to FacebookShare to Pinterest
Labels: Essex, May, penis vote

Another week when Essex rules the world. After waiting 20 years Basildon's Stuart Bingham has won the snooker World Championship at the Crucible in Sheffield. He come out with a few choice Essex phrases including "winner winner chicken dinner" and claimed that his success was inspired by Mark Allen saying he had "no bottle". Nice one, Stuart.

Meanwhile Russell Brand is emerging as the unlikely kingmaker in the General Election, finally advising his followers to vote for Labour. Who would have thought that a geezer from Grays saying he's decided to vote would be big political news or index that Brand would be voted as the fourth most influential world thinker in Britain by Prospect magazine. Grays Man is now up there with John Stuart Mill, Rousseau, Hobbes, Marx and Engels, though presumably none of those ever wrote about taking heroin and sex addiction in their autobiography.

Meanwhile the Guardian's Do Something supplement has a cover feature on Grayson Perry's love of mountain biking. He describes off-load cycling as a boy in the woods around Chelmsford to get away from his dysfunctional family and still cycles in Epping Forest, finding the open competitiveness of mountain biking more honest than that of the art world.

Three very different Essex Men in the news, but all proving that right now Essex culture appears to be taking over the planet.
Posted by Pete May at 01:38 No comments: