Lee Brilleaux of Dr Feelgood once told me, "a bloke had his finger cut off with a penknife right in front of the stage when we played the Lord Nelson pub on Holloway Road." But one menace Canvey's  R&B legend never encountered was triangular flapjacks. A year seven pupil at Castle View School on Canvey Island was hit in the face by a triangular flapjack during a food fight, resulting in the school instructing the cooks not to bake triangular flapjacks and instead make square ones. If the original Feelgoods were playing Canvey today even the hardest men in R&B would surely have to scarper from this new menace of flying flapjacks.
Posted by Pete May at 03:17 2 comments:

Barking balladeer back on form 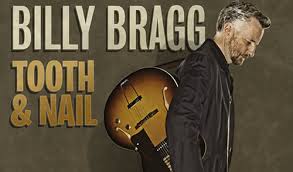 Country music suits Billy Bragg and his new album Tooth And Nail, recorded in America, is more personal in tone and has echoes of Bruce Springsteen's Nebraska and Lucinda Williams's best work. Don't expect Life's A Riot revisited, but it's his best work since William Bloke. Nobody Knows Nothing is Bragg's finest song in years ("What happens when the markets fall?") beautifully capturing the confusion of the times, while Woody Guthrie's I Ain't Got No Home sounds just as relevant today. And I might be wrong, but the excellent There Will Be A Reckoning seems to make campaigning against the BNP on a Dagenham council estate sound like it's written in the Deep South of the USA. "I'm a writer not a decorator!" also gets my vote as a motto on Handyman Blues. And as for the songwriter's beard - love the comment on Amazon from a reviewer who suggests "now he looks like the local bus driver". But a very talented bus driver it has to be said.
Posted by Pete May at 02:16 No comments:

Talking of Simon Heffer and Essex Man it's interesting to see the essence of Essex Man alive and well in the shape of ultra-geezer Ray Winstone. When discussing West Ham on Talksport Radio, Essex resident Ray's comments on tax could have been mouthed by Heffer's 1990 creation.


"I can see myself leaving here quite soon. I love this country but I've had enough of it. I don't see what we're being given back. I just see the country being raped," declared Winstone. And of the taxman Ray said: "What does he give you back? I drive down the road and there's more holes in the road than what there is in a tennis racket, you know."
He also criticised the building of the Olympic Stadium ("They spent billions and billions and billions of pounds on a stadium and we can't build hospitals and we close down fire stations") and sympathised with Mo Farah, "The kid's worked all his life to get where he is, if he's getting paid that, that's all right, I haven't got any qualms with that. He's trained hard enough, and also don't forget he's got a sleeping partner anyway – it's called the taxman, the government. He's not a sleeping partner, he's in a coma because what does he give you back?"
At this rate he might be Conservative MP for Brentwood campaigning on the A13 Bump Road to the Sea. Though having driven in the Solomon Islands two years ago, I can assure Ray that Essex roads are comparatively smooth. And can't all those four-wheel drives cope with the odd bump?
Posted by Pete May at 03:39 No comments:

At the risk of perpetuating negative Essex stereotypes, check out Robin of Essex on Channel 4's Comedy Blaps. Set in medieval Essex, Robin announces himself with "Just nicked a load of shit off some rich people!"Other lines include "So are you going up the archery contest later? So how's it going with Maid Marion then?" It's all the work of Mick Bunnage and Jon Link, formerly of Loaded and men who should know better.  Loved the lines, "Alright Maid Marion how you getting on with that tapestry then?" and "'Ave you heard about King John's new fevver?"
Posted by Pete May at 07:23 1 comment:

The only debate in Essex…

Some 200 people turned up at the Ursuline Convent School in Brentwood for the Essex Book Festival's debate on What Next for Essex? with the spiritual father of Essex Man, the Daily Mail's Simon Heffer (who actually intended his 1990 Essex Man profile as a compliment) and several other Essex luminaries including Vic Goddard from Educating Essex. Read the Brentwood Gazette's review here. Even if Towie is past its vajazzle-by date, I tend to agree with Gazette editor Neville Wilson that if Essex can laugh at itself it's no bad thing. It's a county of contrasts, Estuary Essex, Towie Essex, coastal Essex, Posh Essex, Anglian Essex... Should it all turn into a Balkans-style conflict then at least there's a precedent — Oliver Cromwell once had his headquarters in Saffron Walden. And we could just annexe Bishops Stortford anyway, as it's really part of Essex.
Posted by Pete May at 08:01 No comments: 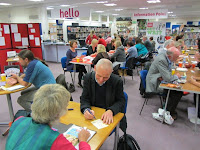 Great Speed Dating for Writers event at Colchester Library last night as part of the Essex Book Festival. A team of 20 or so writers, publishers and agents had four minutes each with the audience to talk about writing and how to get published. A huge array of diverse writing from the punters, from a published human rights novel by Liz Fisher-Frank, to Mike Davies's children's books, horror, literary fiction, Tolkein-esque fantasies, rebellious teenager series, travel memoirs, tales of life as a milliner and deep philosophy. More elevator pitches than at the Empire State Building.

What do you you say to publishing hopefuls? I'd say be determined, don't be put off by rejections, write about what you know, use social media and don't be scared of publicising your work yourself. Poet Martin Newell said read a lot, don't be scared of your voice and don't spend forever getting it finished, while Syd Moore author of Witch Hunt said that on her creative writing MA she was forever told it was a difficult market but she's been published and she says, rather modestly, that if she can then anyone can.

Above all it made me grateful to have actually got some books in print, because it's something lots of people dream of and to judge from this event, everyone in Colchester has a book in them... and also thanks to Belinda and Jules for keeping us all going with those supplies of white wine. Speed dating can be thirsty work…
Posted by Pete May at 05:01 2 comments: 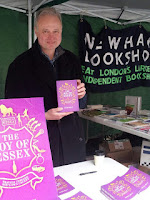 As part of the Essex Book Festival I'll be appearing at the Speed Dating For Writers event at Colchester Library tomorrow, March 14, from 7pm to 9.15pm. It will be run like a speed dating event. Audience members will have four minutes to get as much info as possible from various authors and publishers about their side of the book trade. After four minutes, the compere rings a bell and the audience move on to their next hot literary date…

Fire up the Ford Capri!

Enjoyed the BBC's Ford's Dagenham Dream after watching the film Made In Dagenham on Saturday. It's still available to watch on iPlayer via the link. Biggest revelation was that the makers of The Sweeney were given free Ford cars to use on the condition that Regan and Carter drove Ford Capris and the old lags and toe rags all drove beaten-up Jags. And if they left the door of their motor open while propping open their mincers with a pair of matchsticks? Shut it!
Posted by Pete May at 02:49 No comments:

Saw Essex icon Phill Jupitus starring as oily Tory grandee Sir Francis Whitford in Coalition at the Pleasance Theatre in Caledonian Road this week. Jupitus proved himself adept at playing the camp Conservative, complete with white shoes and a fine repertoire of polishing fresh fruit. He also dons a Yeovil scarf for his five-yearly visit to the constituency. Decent play too, a prescient parody of the current Lib-Dem woes, though I doubt Chris Huhne and Nick Clegg will be watching it.
Posted by Pete May at 04:26 2 comments: