The only way isn't Essex for James Tomkins

News that will make Hayden Foxe well jel and Big Sam wonder if he's being mugged off. West Ham's James Tomkins has been arrested after a fracas outside the Towie haunt of Sugar Hut nightclub in Brentwood at 00.30am on Sunday morning. Tomkins had earlier played in West Ham's 3-1 defeat at Old Trafford. Seems Tomka was refused entry and the Old Bill were called. He was later charged with one count of assaulting a police officer, one count of resisting arrest and one count of being drunk and disorderly in a public place. Tomkins also appears on the Hammers advent calendar video advocating sensible drinking. You really couldn't make it up…
Posted by Pete May at 08:19 No comments:

2013: Another vintage year for Essex

My review of Essex in 2013 can be found on the Robson Press website. You can also pick up my book The Joy of Essex there for £4.99 as part of the Robson Press's Secret Santa offer. Here's the text:

It’s hard for Essex to keep a low profile at any time and in the year since the publication of my book The Joy of Essex, Britain’s most iconic county has not disappointed.
Russell Brand certainly shook up politics after his appearance on Newsnight with Jeremy Paxman, where he advocated not voting. He became a huge YouTube hit, edited an edition of the New Statesman and was described as “Britain’s biggest hypocrite” by The Sun.
Brand used much of the self-deprecating wit identified in The Joy of Essex for a subsequent Guardian piece: “It’s easy to attack me, I’m a right twerp, I’m a junkie and a cheeky monkey, I accept it, but that doesn’t detract from the incontrovertible fact that we are living in a time of huge economic disparity and confronting ecological disaster.”
Perhaps many of the Oxbridge types laying into Brand were simply outraged that a geezer from Grays who is a former junkie turned out be a better writer than them. As Brand wrote: “I think these columnist fellas who give me aggro for not devising a solution or for using long words are just being territorial. When they say “long words” they mean “their words” like I’m a monkey who got in their Mum’s dressing up box or a hooligan in policeman’s helmet.”
Meanwhile Chelmsford’s Grayson Perry was trending on Twitter with his BBC Radio 4 Reith Lectures. Indeed he was, he said, the first “Essex transvestite potter" to deliver the Lectures. There was an earthy Essex spin to his time at the podium, with Grayson “playing to the gallery and not sucking up to an urban elite” and “taking the piss out of Marxist intellectuals.” You don’t normally get laughs at a Reith Lecture but Perry in a dress made it all accessible and funny.
Another political figure from Essex, Billy Bragg, grew a beard and produced his best album in years, the country-influenced Tooth and Nail. Nobody Knows Nothing (“What happens when the markets drop?”) beautifully captured the confusion of the times, while Woody Guthrie’s I Ain’t Got No Home sounded just as relevant today. Perhaps the future for British politics is a Brand/Bragg/Perry coalition?
Essex also took the blogging honours with Southend’s Jack Monroe being billed as “austerity’s poster girl” after the success of her blog agirlcalledjack.com. She wrote like a modern-day George Orwell about the psychological effects of poverty while living as a single mum on benefits. Her recipes on how to feed herself and her son on £10 a week were published by Penguin and she earned a column in the Guardian, with the added bonus of winding up the Daily Mail’s Richard Littlejohn.
On Channel 4 Jonathan Meades half-inched my book title but produced a compellingly verbose and beautifully filmed documentary on the county in The Joy of Essex. Meades covered Victorian utopian communities, the derelict Bata factory at East Tilbury, the Crittall windows of Silver End, the sex life of Barking MP Tom Driberg, and the melancholy of the marshland where “everything returns to the immemorial ooze”.
In fashion, the Guardian’s Paula Cocozza wrote a three-page feature in G2 on “the Brentwood aesthetic”, describing how the Towie-look has taken over the country. Those sporting the Towie-look (thick dark eyebrows, false lashes, blusher, natural coloured lips, fake tan, etc) were said to include the Duchess of Cambridge (eyebrows only), Mary Berry (“Essex Nan”), Paris Hilton, Nigella Lawson, Queen Elizabeth 1 (a lot of slap), the original Barbie Doll and Elizabeth Taylor in Cleopatra.
And speaking of Towie, Joey Essex starred in I’m A Celebrity Get Me Out of Here! He might have needed help from Amy Willerton telling the time, but Joey showed an Essex Man’s self-starting ability to get stuck in to the bushtucker trials, winning ten meals for his team. Joey’s dad Donald, who with his shaved head looked like a proper Essex geezer, became an unlikely media star in The Sun, with his somewhat direct views on romance with Amy: "I think it’s obvious he fancies her. She’s beautiful, she’s intelligent and she’s lovely. So he should steam in there!”
In 2013 we also learned that the Chigwell-set Birds of a Feather was returning, while the West End’s Wyndham’s Theatre hosted hit play Barking in Essex, starring Lee Evans, Keeley Hawes and Sheila Hancock.
On a sadder note, at the start of the year former Dr Feelgood legend Wilko Johnson was diagnosed with terminal cancer and given six months to live, but gave a series of inspiring interviews and sustained by the love shown on his farewell tour is thankfully still with us. Wilko does it right.
While on a personal level I’d like to say thank you to everyone who has bought copies of The Joy of Essex and attended my events at the Essex Book Festival in Colchester and Billericay and the Essex Record Office in Chelmsford. It’s been another great year for God’s Own County.
Posted by Pete May at 06:41 5 comments:

Life's a riot with Bragg versus Brand… 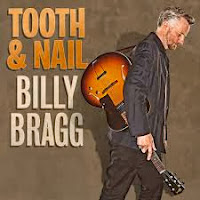 Saw a fine set from Billy Bragg at the Royal Festival Hall last night, with a cold-ridden Bragg displaying his usual range of styles from playing with a pedal-steel guitar and country band to solo songs with acoustic and electric guitars.

The show featured a mention of his home county and line dancing during a speel about going country and how the only twang he had was Essex. And also an inter-county dispute with Russell Brand. Bragg couldn’t agree with Brand about not voting, saying that although “there might only be an inch between Labour and the Tories that inch makes a difference to thousands of people”. He sneaked in a nice change to the lyrics of Waiting for the Great Leap Forwards with: “One step forwards two steps back/ will Russell Brand get me the sack?”

William Bloke also mentioned his grandfather walking from Barking to Buckingham Palace to sign up for the First World War in the introduction to Between the Wars and two of his most moving songs were tributes to his late parents, Tank Park Salute and Goodbye. He also impressed my 15-year-old daughter who thought Handyman Blues could have been written about her dad.

Spent most of my life growing up with Bragg, so it was lovely to hear some of his older numbers like You Woke Up My Neighbourhood and New England alongside great new songs like No one Knows Nothing Anymore and There Will Be a Reckoning. All interspersed with the usual Bragg wit on being hip again (“Nowadays there’s lots of 25-year-old blokes with beards wanting to sound like Woody Guthrie and wishing they were 55!”) and sage advice to never trust anyone who has no doubts, “as they’re either an evangelist or a Trotskyist trying to sell you a paper.” Long may he continue.
Posted by Pete May at 12:39 No comments: