Still searching for that Christmas present? Here's my suggestion for Essex literature (and no that's not an oxymoron) in no particular order. All are about Essex people or feature Essex:

Semi-Detached by Griff Rhys Jones
My Booky Wook by Russell Brand
Good Morning Nantwich by Phill Jupitus
Billy Bragg: Still Suitable for Miners by Andrew Collins
Jamie's Great Britain by Jamie Oliver
The Importance of Music for Girls by Lavinia Greenlaw
Ian Dury by Will Birch
Starter for Ten by David Nicholls
The Life of Lee by Lee Evans
The Little Book of Essex by Dee Gordon
Essex Girls by Karen Bowman
Posted by Pete May at 04:52 4 comments:

Another annus mirabilis for Essex

Hertfordshire - it isn't you. If last year was an annus mirabilis (sadly not available at Amy Childs' new beauty salon) for Essex, this year it's been even better. McFly's Harry Judd from Chelmsford has won Strictly Come Dancing and Essex claimed the entire top three of I'm A Celebrity, winner Dougie Poynter from Corringham, Mark Wright from Abridge and Fatima Whitbread from Shenfield.


All of this on top of Towie winning a Bafta in April, beating Downton Abbey ("chavs beat the toffs" as the Sun put it) and a solo show for Amy Childs It's All about Amy on Channel 5 plus Amy opening a new beauty salon in Brentwood and Lucy Mecklenburgh opening her boutique in Ongar Road. In The X Factor winners Little Mix included Jesy Nelson from Romford. While in music Southend's The Horrors and Romford's Jesse J had huge success. In fact the only Essex Man who didn't do too well was Andy Coulson...

What have the Romans ever done for Colchester? 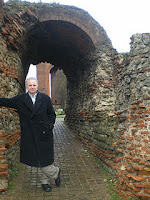 Just celebrated my wedding anniversary in Colchester - and what an underrated place it is. For the history buff there's a bit of everything.

We stayed in the excellent Trinity Town House B & B, which was the home of John Wilbye, composer of the first Madrigal in the 16th century. Opposite was the pre-Norman Holy Trinity Church built from recycled Roman bricks and now a cafe with Tudor dancing.

Colchester Castle is also constructed from recycled Roman materials and you can stand in the very Roman vaults that were sacked by Boudica and see pottery blackened by the Iceni's fires. Stretches of the Roman wall around the city could rival Hadrian's Wall and there's the best-preserved Roman gateway in Britain in the Balkerne Gate.

Another piece to get Time Team buffs salivating is the Old Siege House restaurant where bullet holes from the civil war battle are still visible in the timbers. That is unless the bullet holes were just the result of spilling someone pint.

Colchester is hilly for Essex, and much more East Anglian in feel than Estuary Essex. The Christmas market and old buildings all added to the charm of Britain's oldest town. There's also a futuristic £28m Firstsite art gallery that looks a like an upturned Sydney Opera House and has works by the likes of Andy Warhol and Sarah Lucas.

Another interesting fact is that when the Romans invaded they regarded Cunobelin, the king of the Thinovantes tribe of Essex, as the king of all England. Before the Romans invaded in AD43 Colchester was Camulodunum, meaning 'the Fortress of Camulos" - the Celtic god of war. Proof indeed that Essex is well hard and should still be the capital of the UK.
Posted by Pete May at 03:49 6 comments:

Battles of the Battis 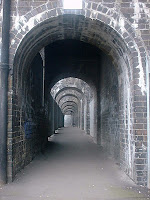 Next to Romford station is a dingy alleyway running alongside the railway arches called The Battis. My pal Katie, a former Romfordian turned Islingtonian, reveals that the Battis was the stuff of childhood nightmares, a sort of Lord of the Rings netherworld terrorised by Romford Orcs. She told me: “My mum and dad were quite relaxed and easy going but when I was a teenager the one thing they said to me was ‘we don’t care where you go, but whatever you do don’t go up the Battis!’”

So while visiting Romford it was with some trepidation I stepped past the shop backs and into the Battis. A sign warns “CCTV in operation”. On the left are huge cavernous railway arches, sealed off with wire netting. On my right is a 1980s football-pen style high wire fence. It’s a narrow corridor that might as well say ‘please mug me, bruv’. Mercifully I make it through and even pass a couple of people carrying shopping bags. Round the back of Sainsbury the Battis reaches the River Rom. It’s sealed off by more wire mesh, though someone has, with some dexterity, managed to chuck a shopping trolley over the top and it lies broken and half submerged in the water. The Rom is only a couple of feet wide and then disappears under the new Sainsbury. The town doesn’t seem particularly proud of its eponymous river. And then I dash back through the Battis to South Street.

When I later remark to Katie that with all those arches it looks a little like the Colisseum in Rome, her instant riposte is, “And you’ve got about as much chance of surviving there!”

Ross Kemp, could you handle the Battis?
Posted by Pete May at 03:12 3 comments:

Hertfordshire - it isn't you. Top three in I'm A Celebrity. Quite a result for Essex. Will we be seeing Dougie, Mark and Fatima out for a celebratory steak at Mason's restaurant?

Meanwhile Mark has told the Mirror he isn't ready for a relationship with Emily. Though in my experience Essex and Australia go together quite well. Flat countryside, big cars, lots of big new houses, huge extensions, swimming pools and a penchant for good meaty tucker. Think again, Mark, you might enjoy going Down Under.
Posted by Pete May at 09:24 No comments: