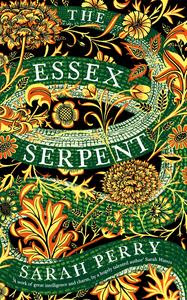 There's been some glowing reviews of Sarah Perry's new novel The Essex Serpent. It was book of the week in Saturday's Guardian and described by the Sunday Times as  "One of the most memorable historical novels of the past decade". It's set in 1890 around the Blackwater estuary and is the story of widowed Cora Seagrave who moves to the wilds of Essex and hears stories of the mythical serpent terrorising folks on the river. She is soon involved in a complex relationship with the local vicar and adversary of the serpent William Ransome. Sounds like it has a lot to say about Victorian attitudes to science and religion and indeed Essex and I'll be reviewing it as soon as I've got a copy. Interestingly the Essex Serpent is also a pub in Covent Garden. Not a lot of people know that.

Frontline art from Essex in WW1 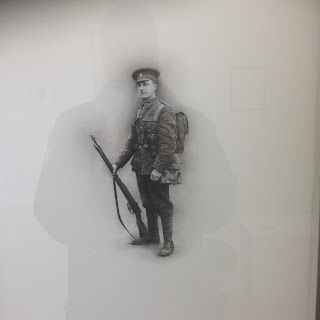 Artist Barry Thompson's work is inspired by his adolescent memories of where he grew up, "an area of Essex between Dagenham and Romford (or the further reaches of East London depending on your point of view)." Thompson's exhibition, Fistful of Blood and Feathers, at Peer in Hoxton has three categories of, "playing soldiers, bird watching and sexual awakening."

Thompson explains: "All took place in the same location, the same backfields and alleyways I would escape to - either with friends or alone. Hiding in the trees or long grass (stalking, secretive behaviour), building dens (in which to prepare for battle, to decorate with pornography), under-age smoking, drugs; or just ambling and wandering in search of that elusive species of bird, never found."

The first room of the exhibition features postcard-sized paintings of blossoming hawthorns, country lanes and scrub illuminated by sunlight. The second room features his affecting world war one pictures. Thompson discovered that war poets Wilfred Owen and Edward Thomas trained at the then-rural Romford, along with artists Paul and John Nash. His images of soldiers are surrounded by white, as if eternity is closing in, while the hand-written crosses inked above the heads (my granddad did the same on his war pictures to indicate his position) look like flying birds.

It's well worth a look and my wife Nicola, who knows about art, enjoyed it too. The exhibition runs until July 9 and has an interesting library accompanying it. I enjoyed thumbing through Michael Foley' Front-line Essex and reading about the important role my childhood haunts of Warley Common and Warley Barracks played in Britain's wartime history.