The joy of Colchester united 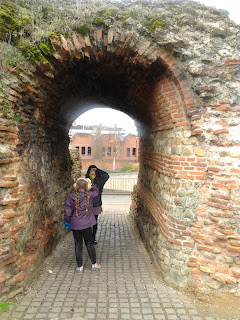 Took the kids on a day trip to Colchester during the Eater holidays and what an underrated place it us. We started off with lunch at the Lemon Tree restaurant where you dine next to the 2000-year-old Roman wall in the basement. Then we visited the Balkerne Gate which has the best preserved Roman arch in Britain, Jumbo the giant water tower, and the outside of the castle (the interior is closed until 2014 for renovation). Then we found the monument to the two royalist commanders executed in the Castle Park and the Old Siege House where bullet holes from the English Civil War of 1648 are picked out with red rings around them.

Our party went on to the Firstsite art gallery, aka the "Golden Banana". The loitering goths outside are the best exhibit, but there's also resin sleeping bags and abandoned mattresses by artist Richard Hughes and a very good cafe that does cinnamon coffee and music that impressed my 14-year-old elder daughter. There's a chapter on Colchester in my book The Joy of Essex and the town also boasts an excellent independent bookshop in the Red Lion Bookshop, where the book is now in stock. What have the Romans ever done for Colchester? Quite a lot actually. All this, and it's the oldest town in Britain. Take that, Londinium. Proof that Essex should really be the capital of Britain. 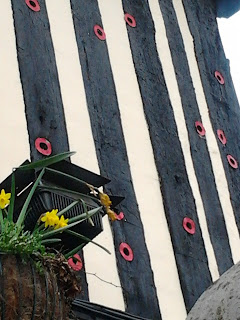 Lots of mentions of Essex in the coverage of Margaret Thatcher's death. The BBC coverage featured Lord Sugar saying that "anyone from Essex" could become a dealer in the City, along with strike footage accompanied by a soundtrack of Barking's Billy Bragg singing Which Side Are You On? Harry Enfield's Loadsamoney was also included, a character who was the forerunner to Essex Man, billed as "Maggie's mauler" in Simon Heffer's original 1990 piece. And this morning Radio 5 was live from Basildon with its Thatcher coverage, with heated phone-ins illustrating just how much she divided the country. Many of Thatcher's policies did initially appeal to the Estuary half of Essex, the old East Enders who wanted to own their own council houses, get a satellite dish and new motor and work in the City, though when subsequent recessions and the banking crash of 2008 arrived they didn't like being sold a pup either. Like it or not, Mrs Thatcher and Essex are linked in the public consciousness.

My parents loved her while I often felt like the only Labour voter in the village. Indeed my old local in Great Warley was called the Thatchers Arms, which visitors probably assumed was named after the Falklands War, though actually the name pre-dated the Thatcher Years by a few centuries. When I revisited Great Warley in 2010 to write The Joy of Essex there was still a tribal “Conservatives” poster on the village green. When Tony Blair was elected in 1997 Basildon was the key seat. And in 2012 David Cameron, Nick Clegg and Ed Miliband all visited Essex to try and claim the Essex vote. While the cast of Towie are surely children of Maggie, all eagerly starting their own businesses (Amy Childs is worth a cool £10 million) or advocating hard work in Attitude magazine as Kirk Norcross did, and some might say, like Mrs Thatcher, knowing the price of everything (but the value of nothing?). One of the undoubted legacies of Thatcherism is that Essex is now deemed the most totemic county in politics.
Posted by Pete May at 02:29 10 comments:

Come on the Shrimpers

Good luck to Southend United in their first appearance at at Wembley today in the Johnstone's Paint Trophy Final. Interesting piece on BBC Sport.com about the club's fight for survival and the plans for a new stadium that will help regenerate the club and town. Click on the link to read.
Posted by Pete May at 04:06 2 comments: